The 4W power limitation on CB radios isn't new. However, you can get your hands on an SSB CB radio which can use up to 12W of transmission power and this will greatly improve your communication range.

Sadly, the question isn’t always about what an SSB CB radio can do. Rather, it should be about how you can get the best SSB radio that will work for you. In that spirit, we rounded up seven of the best SSB CB radios on the market so that it can be far easier for you to get your SSB radio of choice.

While you can easily go for our top pick (the Galaxy DX-959) and be done with the search, we found it useful to equally include a buyer's guide. This is because it can come in handy if you don’t quite find the SSB CB radio that you were looking for on our list.

What is an SSB CB Radio?

An SSB CB radio or Single Sideband radio simply refers to a radio that can use the upper and lower sideband channels in addition to the standard channels. It is thus an improvement over the normal AM radio systems as it is more powerful and can provide better range compared to regular CB radios.

How We Picked These 7 SSB CB Radios

Not all CB radios have SSB capabilities, and this was one of the factors that we had to appreciate from the start. As such, we kept our focus on the other features that the SSB radios came with which further complemented their functionalities.

In addition, we also selected these seven SSB radios based on their online reviews. We tried to be a bit fair with all the radios we reviewed by choosing them based on what they could do rather than what the radios could not do. Durability and ease of use were equally some of the other factors we had to consider when selecting the SSB CB radios. 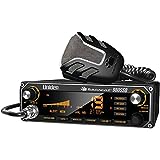 Any serious CB operator can tell that the Galaxy DX-959 was built with performance, precision, and reliability in mind. Its large and easy to read meters, for example, are perfect for viewing radio parameters such as the frequency and the current active channel.

However, the radio is much more than that as it comes with some interesting features which will end up giving you a grand CB radio experience.

For starters, the DX-959 is an SSB radio which means that you get up to 12W power output from the radio compared to the regular radios which can only output 4W of power. Many SSB radios may have the same 12W power output, but this radio's noise handling features further magnify its power.

You do get amazing noise reduction features such as ANL and Galaxy's proprietary GNF which means that you will be getting decent quality audio from the unit. Since it equally comes with squelch control, noise will be an issue that you can hardly relate with once you have the DX-959.

In addition, it is also worth mentioning that the radio has a variable dimmer control with a push switch which you can use to control the brightness of the meter lamp.

If looks are something you consider when picking an SSB CB radio, then perhaps the Stryker SR-955HPC could hold the answer. As one of Stryker's best radios, the SR-955HPC is a powerful CB radio with all-round performance and some of its features may very well outperform those of its rivals.

We loved the fact that we could get powerful signal transmission and reception on the SR-955HPC, and this could partly be attributed to its high power output of over 70W PEP. This can however vary up to 85W on SSB. AM mode, on the other hand, can only manage 65W.

The 32-position dimmer is also something that stood out for us. This was partly because you can not only change the brightness of the backlight, but also the color of the backlight. Though there's no harm in sticking to one color, having six other colors to choose from is cool and convenient for many people.

You can also program this radio in case you wish to tweak a few of its features. A great way to start is with the roger beeps. The SR-955HPC comes with 6 programmable roger beeps, and this means you can come up with or even modify a roger beep if you have a PC and the appropriate connecting cable.

While the SR 655HP is a newer model compared to the SR 955HPC, it is easy to judge it as a lesser radio because of its model number. The truth, however, is that the SR 655HP and the SR 955HPC are more identical than you think with the SR 655HP having a few extra features.

The SR 655HP comes with ASC and manual squelch for helping you reduce noise. While squelch control may be common in many radios today, manual squelch comes with a slight advantage in that it lets you change your radio's sensitivity so that you can adjust it for different signal strengths.

The radio can also use either 12V or 24V. As such, you don’t need to worry too much about the voltage of your power source. On the same note, the SR-655HP lets you adjust it from a 2W carrier to a 15W carrier. This can be attributed to the radio's Top Gun technology which helps maintain a steady 70+ watt peak.

In addition, the radio also has the dual watch function which lets you tune in to two frequencies at the same time. Supposing you wish to switch over to channel 9 or 19, the convenient 9/19 button can help you get there faster without having to use the channel rotary switch.

The LCD display on the unit was not exceptionally large, but it was just the right size. You can easily read values on the display and because it is also backlit, there will be no problem using the radio in low light conditions.

What's not to love about the Uniden Bearcat 980 SSB? If it is a matter of performance, you'd be happy to know that the 980 SSB can function flawlessly in either AM or SSB mode. It has an easy and simple to use interface that any beginner will instantly familiarize with.

The Uniden Bearcat 980 SSB offers you full spectrum CB operation that underscores what a true CB experience should be. The radio comes with a well-designed front-facing plate that has a large and easy to read display.

Apart from showing the current channel and frequency, the display also shows the S/RF and indicates whether you have the ANL and NB on.

In addition, the Uniden 980 SSB may be one of the few radios that has amazing noise canceling microphones. Even though it uses the stock mics like all other radios you’ll find, the sound it outputs is quite clear.

Galaxy's DX-979 is a great pick if you love the classic CB radio designs. However, this should not fool you into believing that you'll be getting poor performance from the radio.

First off, it features a large and easy to read meter that comes with 4 scales. They can show details such as the levels of SWR, power, and modulation percentage. In addition, it is worth mentioning that since the DX-979 comes with an automatic SWR circuit, tuning the radio will be easy.

The radio operates on a frequency range of 26.965 – 27.405MHz which is the standard frequency range for CB radios. Other than the SSB mode, you could also use other modes such as AM, USB, or even LSB.

The Galaxy DX98VHP is the ideal radio for CB enthusiasts who need much more from their radios. The DX98VHP is unique because it bridges the gap between 10-meter and 11-meter radios by having the best features of both worlds. It operates in up to three different modes (AM/SSB/LSB/USB) and has more power than you might ever need in a radio.

With up to 200W PEP at your disposal, the DX98VHP could be perhaps the most powerful radio on the list as it has the features of an amateur radio and the look and feel of a CB radio. You can use features such as the variable RF gain control to increase the sensitivity of the radio.

What to Consider Before Buying SSB CB Radios

However, since you are looking for performance, having a radio that can transmit using 12W is not going to cut it. There are a few more features that your SSB CB radio should have so that you can get the most out of your transceiver.

To some people, there really isn’t a significant difference between squelch control and RF gain since they both help reduce noise. However, RF gain works by blocking out faint signals in favor of strong signals while squelch control reduces static noise.

You should thus ensure that your SSB CB radio comes with these features since not all SSB radios come with both RF gain and squelch control. They will go a long way in improving your CB radio experience particularly in noisy environments.

You certainly cannot leave out a radio with ANL since it complements squelch control and RF gain flawlessly. SSB CB radios do still pick up a lot of noise despite being powerful, and ANL can help make outgoing transmission far clearer by filtering background noises.

While it may not be easy to point out the ANL's contribution, the combination of RF gain, squelch control, and ANL will make your SSB CB radio stand out. This makes it a feature you should not ignore.

Scanning 40 CB channels can become tiring if you have to do it consistently. As such, you should look out for an SSB CB radio that has automated channel scanning which lets you change stations without taking your attention from the road.

The automatic channel scan will stop on the first clear channel it finds once you press the scan button. If the channel it stopped on isn’t the one you wanted, you can press the appropriate control button to instruct the radio to keep scanning for another active channel.

Your SSB CB radio should also be capable of providing you with weather alerts. In fact, you are likely to get an even better experience when you own an SSB CB radio. This is because since they can output more power, you can expect them to pick up far away signals.

Since the weather can change at any time, an SSB CB radio with NOAA weather alerts can warn you well in advance so that you can protect yourself in case of an emergency alert.

Though SSB CB radios are ideally for everyone, professionals and enthusiasts who need that extra power can find them very useful. As there are hundreds of SSB CB radios to choose from, it is easy to forget to review the features that really matter when selecting these types of radios.

Your ideal SSB CB radio should be able to serve you without letting you do all the hard work like dealing with noise or weak signals. However, whether you are a newbie or not, you cannot go wrong with our top pick, the Galaxy DX-959.