Though we managed to get our top pick – the Wilson 305-38, we must admit that it was particularly difficult to come up with a top pick since all these magnetic CB antennas were special in their own way.

What is Magnetic Mount CB Antenna?

Before we go too far ahead, we first need to clear the air about what magnetic mount CB antennas really are and how they could be useful to you.

As their name suggests, magnetic mount CB antennas simply use a magnet mount structure to secure the antenna to your vehicle.

For many people, magnetic mount CB antennas are great since they offer a lot of flexibility such as giving you the ability to move the antenna to different spots on your vehicle.

How We Picked These 7 Magnetic CB Antennas

We considered the quality and durability of the magnetic CB antennas before including them in our list to make sure you get only the best.

In addition, we kept a close eye on other people's reviews on the antennas. We only focused on magnetic CB antennas that garnered a good number of positive reviews online. 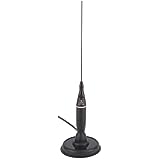 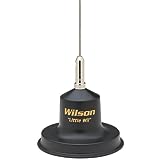 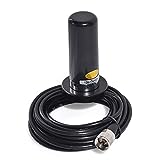 It is difficult not to love the Wilson 305-38 because it is perhaps one of the best choices whenever you are looking for an antenna that can deliver killer performance. The "Little Wil" uses Wilson's own exclusive low loss coil designs, and this means that you will get above average performance from a whip antenna like the Wilson 305-38.

Though you can categorize it as a small base load antenna, you will find that the large 10 oz. magnet is always more than enough to help keep the antenna upright. This allows you to place the antenna on any convenient spot on your vehicle without having to worry about it falling off soon.

In addition, the Wilson 305-38 uses a 14-gauge wire which goes a long way in helping you get the maximum power handling. The magnetic CB antenna can handle up to 300W which is perfect for just about any CB radio out there. It also has a frequency range of 26MHz to 30MHz meaning you could use it with other radio devices you own.

Furthermore, Wilson did not take the durability of the antenna lightly. This is because the antenna is made with high impact thermoplastic. So, despite standing tall at 38", you can expect the affordable and high-performance Little Wil to give you the service you need for years to come.

Despite its looks, the Nagoya UT-72 is a dual-band antenna that comes with some amazing features out of the box. Measuring at 19 inches, the omni-directional antenna comes with a super loading coil which increases range as well as your radio's reception on UHF.

As it uses the standard PL-259 connector, you won’t have to worry a lot about compatibility as well. However, in the event that you do have a different connection type on your radio, the included SMA female adapter might come in handy.

Performance-wise, Nagoya's UT-72 is only capable of a maximum power of 80W. Though this is lower than that of the Wilson 305-38, you can still use it on your CB radio without any fuss. Additionally, since it is far shorter than the 305-38, it will experience less sway, and this may make it last a little bit longer.

It has a fairly large base for its size. Since it uses a 3.25" magnetic mount that is made from a heavy-duty rare earth magnet, you can be sure that the antenna will firmly remain on the spot that you chose to install it.

The antenna is compatible with many popular radio brands like BaoFeng, Uniden, and Cobra. What's more is that Nagoya made sure to include an RG316 SMA jumper in the package which will allow for easier installation of the antenna on your handheld radio.

If you're wondering why the base is larger, then you should perhaps know that the Hustler IC100W is a whip antenna that is 41" long after assembling all parts. The wide base gives the antenna the extra support it needs.

The actual antenna is made from stainless steel and then attached to its magnet housing by a chrome-plated brass whip adapter. Underneath the magnet is a protective rubber layer which prevents your vehicle from getting any scratches.

Regarding performance, you may have already noticed the power rating of the antenna in its name. A 100W power handling makes the Hustler IC100W a powerful and desirable antenna for any CB radio owner who is interested in getting some serious performance from their radio.

As Cobra makes its own radios, we expected nothing but top performance from the Cobra HGA 1500, and we can honestly say that it does not disappoint.

For starters, the HGA 1500 comes with the widest magnetic base we've seen so far. The 4-inch magnet will forever ensure that the antenna will remain wherever you place for as long as you need it to. It is also worth noting that Cobra didn't fit just any 4-inch magnet, but a non-abrasive heavy-duty magnet that will last long and won't lead to unnecessary scratches on your vehicle's exterior.

Ideally, the HGA 1500 is an antenna that would go well with any SUV or truck. Cobra made sure to include a long 15-foot matched-braided coaxial cable so that you won't necessarily have to spend an extra buck on a coax. In addition, the antenna uses the standard PL-259 connector.

While the talk around the Cobra HG 1500 revolves around CB radios a lot, this antenna is equally perfect for amateur radios as well. This is thanks to its broad-banded frequency which ranges from 26MHz to 30MHz.

The story here is almost the same as that of the Cobra HG 1500 because Midland also creates some amazing CB radios. As such, you can already tell that you are getting performance and quality when you grab the Midland 18-2442 magnetic CB antenna.

For one, Midland's 18-2442 antenna is a center-loaded antenna meaning that you will be getting great reception almost all the time. Unlike other manufacturers who include a center load and leave out the relief spring, Midland 18-2442 comes with the relief spring to help minimize damage to the whip eventually.

The antenna stands tall at 17.7 inches which places it next to the Nagoya UT-72 in terms of height. This in turn makes the base less wide than that of the Cobra HG 1500.

In addition, it is also worth pointing out that Midland's 18-2442 magnetic antenna uses a plastic-coated base rather than a protective rubber layer. While plastic will still get the job done, you should be careful not to move or slide the antenna from one spot to another. Rather, you should lift off the antenna and place it at a desired spot.

You will find that the differences between the Tram 300 and the Cobra HGA 1500 all boil down to brand since nearly all the specifications between the two are identical.

The antenna is made from stainless steel which means that it can withstand a lot of back and forth movement with ease. The Tram 300 does not include a relief spring at the base like the Midland 18-2442, but this does not necessarily mean that it will have a lesser performance.

In fact, the Tram 300 can comfortably handle up to 300W of power which makes it join the league of the HGA 1500 as well as other radios that are commonly used by ham radio operators.

We were also pleased to find out that the antenna uses a rubber boot on the base so that you won't get scratches on your vehicle's surface.

It is by far the most unique antenna we have featured on the list primarily because it isn't a whip antenna and because it measures just 3.5" in height. If you're new to CB radios, then you might easily misjudge the Eightwood Dual Band antenna for not having the best performance, but that is far from true.

While short antennas don't always have the best range, the Eightwood Dual Band offers you above average performance while giving you something that none of the other antennas could – stealth.

The Eightwood Dual Band magnetic antenna did not need a necessarily large base because it is super short. However, it does come with a 16.4-foot coaxial cable which lets you place the antenna virtually anywhere on your vehicle.

Even though it is short, the antenna has a maximum power capability of 50W which is still something to smile about. Sure, it may not be the best antenna for long-range communication, but it will definitely do a good job if you have a CB radio and you were only interested in local communication.

As it uses the standard PL-259 connector, you can use the Eightwood Dual Band magnetic antenna with a wide variety of CB radios and ham radios that support PL-259 connections.

Magnetic CB antennas come with a few benefits that are difficult to come by if you were already used to other types of antennas. A few benefits of these antennas include:

What to Consider Before Buying a Magnet Mount CB Radio Antenna

Naturally, a large mount size means that it will offer more stability for the antenna especially if it is long. It is for this reason that you find long antennas featuring wide magnetic mounts. Shorter antennas, on the other hand, will have relatively smaller magnetic mounts.

You should choose a magnetic mount CB radio antenna that will be effective for the location you intend to install it in. If there's a lot of wind resistance in the spot you'll be placing your antenna, it is best to choose an antenna with a wide magnetic mount.

oday's radios use standard connector types, you still need to check if the microphone will be compatible with your radio. This could potentially save you from spending money on a good CB microphone that won't work with your CB radio.

Long magnetic mount CB radio antennas will offer better range than shorter ones. However, there are valid reasons why not everyone fancies long antennas.

For magnet mount antennas, a long antenna would mean that the base has to be wide and that the magnet being used has to be strong enough to provide the antenna with stability. This can make long antennas a bit pricey.

In addition, they tend to sway a lot and can thus limit you from installing them on other spots on your vehicle.

The length of the antenna may determine where the coil will be placed. Center-loaded antennas, for instance, usually have a coil towards the center of the antenna. This makes them versatile and highly functional.

Type of Material Used for The Base

Magnetic CB antennas with a rubber base are better than those that are made from plastic. Those with rubber bases can hardly ruin your vehicles paint and are more long-lasting. Antennas with plastic bases are not all that bad, but they are more prone to wear and tear.

In addition, since the antenna will be experiencing all sorts of harsh conditions, it is important to choose an antenna that has a durable base.

Ideally, your primary focus when selecting a magnetic CB antenna should be on durability and effectiveness. You should strive to pick an antenna that will do its job regardless of the conditions.

In conclusion, it is safe to say that the best magnetic CB antenna you can find is the one that works best for your case. Most of the antennas we've reviewed have varying lengths and different mount sizes. As such, it makes sense to pick antennas that will meet your needs.

Regardless, you won't go wrong if you were to pick the Wilson 305-38 since it is an all-round magnetic CB antenna with impressive features. However, if our list did not have a suitable antenna for your CB radio, then you should consider the coil type, antenna length, and the mount size before purchasing a magnetic CB antenna of your choice.