Getting a good CB radio is usually the first great milestone for any CB radio enthusiast, but when it comes to tuning your radio, SWR meters become an unavoidable subject.

If you simply sought a great all-round SWR meter that you can use for either your CB or Ham radio, then you should check out our top pick – The Workman HP201S. 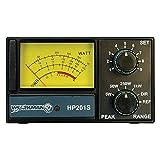 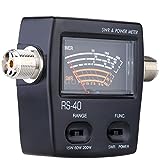 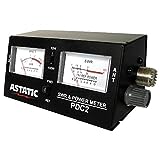 Why Own an SWR Meter?

For some people, antenna tuning may be a one-time process. However, there are situations that will require you to tune your antenna again such as when you reposition the antenna.

How We Picked These 7 SWR Meters

We mostly focused on the SWR meters features such as their sensitivities and frequency ranges. While most people would instantly want the most feature packed SWR meters, they often come with heavier price tags.

However, picking out only the most feature packed SWR meters would have locked us away from some hidden gems. That is why we also reviewed the SWR meters based on their durability and ease of use.

Though build quality is something people easily oversee when selecting SWR meters, we were happy with almost all of the SWR meters we selected as they looked and felt sturdy.

Plain, simple, and straightforward are the first words that came to our minds when we saw the Workman HP201S SWR meter. The actual scale lies on the left of the front-facing plate which leaves enough room for the RF and SWR knobs. The two are comfortably spaced far apart so that you don't get to turn the other knob by mistake.

Despite its classic look and design, this little SWR meter is backlit and this means you can use it in low light areas. Your car's interior can get a little dark at times, and the backlit meter ensures you can easily read accurate values from the meter.

The meter lets you choose between four different power settings: 5W, 50W, 250W, and 1000W. With 1000W as the meter's highest power setting, you can use the SWR meter to tune a wide variety of antennas. However, it is worth noting that the meter was designed for 50-ohm antennas.

Either way, the HP201S is a great SWR meter for both CB radios and amateur radios.

Right off the bat, you will notice that the Astatic 302-PDC2 has two main meters. This will lead you into thinking that it only has two functions which revolve around the SWR meter and the power meter. Nevertheless, the meter comes with an additional function. It can also test for field strength and this makes it one of the few versatile SWR meters you can buy.

In between the two scales, there is a switch which changes the power setting from 10W to 100W. This means that it is only capable of handling a maximum of 100W.

As such, the SWR meter would be great for any CB radio owner as antennas with power ratings of 100W are ideal for CB radios. On the same note, just like the HP201S, this SWR meter is also designed to test 50-ohm antennas only.

The meter is also noticeably lightweight which makes it easy to use. Since Astatic knows how problematic installing the meter can be, it included a mounting bracket and accompanying hardware to make the process a little easier for you.

The meter still has the same 10W and 100W power settings and this also means that it is mostly perfect for CB radios. Ham radio operators with powerful radios might want to go for SWR meters that can go above the 100W mark.

Weighing in at just 8 ounces, it is noticeably lighter than the PDC2. Its portability makes it a great tool to have in your car in case you occasionally make small adjustments to your antenna. Just make sure that the antenna you wish to tune is a 50-ohm antenna.

The fact that this SWR meter is lightweight, simple, and easy to use makes it the perfect meter for getting a beginner.

One quick look at this SWR meter and you know all your SWR problems will be coming to an end. The MFJ-259C HF is perhaps one of the most sophisticated SWR meters we've come across as it incorporates both digital and analog features for your convenience.

Though tall and larger in size than most of the other SWR meters we've covered, it comes with some amazing features and controls that make it top notch. For one, its 2-line LCD display lets you see your SWR instantly as soon as you dial in your frequency.

In addition, the SWR meter comes with a built-in frequency counter. This means you won't necessarily need a transmitter or a radio to have some information about available frequencies.

It covers a wider range of frequencies than both the two Astatic SWR meters that we've reviewed along with the Workman HP201S. With the MFJ-259C HF, you will be able to deal with frequencies of up to 230MHz without a radio attached. This makes it ideal for both amateur radios, CB radios, and other kinds of two-way radios.

The Tenq 1051 takes the crown when it comes to simplicity, size, and compactness. This could be attributed to the fact that it is a fully digital SWR meter. Additionally, the large ON/OFF button at the center of the meter is super deceiving and can lead you into believing that this SWR meter is fully automatic.

Well, after connecting the output of your transceiver to the TX and your antenna to the ANT terminal on the right, you are to press the button once to power on the meter. Afterwards, the meter will automatically display the passthrough power, the feedback power, and the SWR value.

Performance-wise, the Tenq 1051 has a maximum power rating of 120W which is fairly decent. It also operates on a frequency range of 145MHz for VHF and 435MHz for UHF frequencies.

This is yet another SWR meter with a unique look and feel thanks to its scale and the nature of its knob. The MFJ-884 has one main knob which changes the range. The SWR meter is capable of three different range settings. They are X1, X10, and X100 which all stand for 1W, 10W, and 100W respectively.

The scale, on the other hand, can show the SWR reading, the forward power, and the reflected power. If you'll be using the meter at night, you also needn't worry since the LED backlight on the meter has you covered.

Regarding frequency, the maximum frequency that this meter can operate within is 525MHz which still makes it ideal for use with both ham radios and CB radios as well.

You may, however, want to confirm the antenna connector type that your radio uses before you get the MFJ-884. This is because it uses the SO-239 connector instead of the PL-259.

Signstek's professional standing-wave meter re-establishes what a handy SWR meter should look like. Rather than fitting it with a bunch of knobs, Signstek only included two useful switches on the front-facing side of the meter.

The first switch controls the range which can be 15W, 60W, or 200W. On the other hand, the switch on the right changes the functionality of the meter from either measuring SWR level or power.

With a maximum power range of up to 200W, the Signstek professional could very well be one of the best and most powerful compact SWR meters we've come across.

Bearing in mind that this meter also operates on a frequency range of 430-450MHz, then you know you can use it with many other devices apart from your ham radio or your CB radio.  You do, however, get a measurement accuracy of ± 5 to 10% when using this SWR meter.

What to Consider Before Buying an SWR Meter

Though they serve a simple function, there are a few things that you should consider before purchasing SWR meters. Sure, almost all SWR meters (even inbuilt SWR meters) have a scale that shows you the current SWR reading.

However, not all readings from different SWR meters will be the same because of sensitivity, and frequency range.

SWR meters have different sensitivities, and this is what differentiates them. An inbuilt SWR meter, for instance, has a lower sensitivity than a standalone SWR meter. However, you should ideally pick an SWR meter with average sensitivity.

Using an SWR meter that does not operate in the same frequency range as your CB radio will mean that your radio won't be sensitive enough.

Well-built SWR meters usually have connectors that are of good quality which give accurate readings. In addition, the meters also need to have an antenna connector (ANT) along with a TX connector which goes to the radio.

You may also come across VSWR while searching for the best SWR meter, but you shouldn't worry too much as they are ideally the same thing.

Picking the best isn't difficult too since you only need to know the frequency range of your radio. Either way, if you aren't a radio expert, the Workman HP201S could still adequately meet your day to day needs.

[…] Galaxy DX-2547 features an inbuilt SWR meter which the operator can use to test and calibrate their antenna system for solid communication. This […]