Choosing the best 10-meter CB radios is not all that difficult if you are a skilled ham operator. After all, acquiring a license to operate a 10-meter radio means that you are knowledgeable enough to pick a good 10-meter radio.

Sadly, the challenge is that there are plenty of 10-meter radio brands in the market today. Unlike some years back, you are nowadays faced with many brands to choose from, and the worst part is that some models look alike.

We thus went ahead and tried to make things a tad bit easier for you by reviewing five of the best 10-meter radios that you can buy today. While we loved all of them equally, we were mostly amazed with Stryker's SR-955HPC which we believe is ideal for enthusiasts and non-enthusiasts alike.

Before we go any further, it would be a good idea to offer some clarity about 10-meter radios since we might equally talk about 11-meter radios along the way.

10-meter radios are also known as ham radios or amateur radios. They are powerful kinds of radios that are far more powerful than CB radios and can allow long-range communication.

They operate at high power levels that can exceed 1000W. However, with this kind of power also comes responsibility. FCC regulations require you to have a license before you can use a 10-meter radio. This is because very high radio energy can be harmful, and this is what necessitates its proper use.

How We Picked These 5 Best 10 Meter CB Radios

Owing to the vast number of 10-meter radios in the market today, we picked these five best 10-meter radios based on their reviews and their overall quality. We did consider the features that the radios ship with as well as how much the radios cost. Since we strived to be all-inclusive, we tried to pick the most affordable 10-meter radios that came with amazing features. 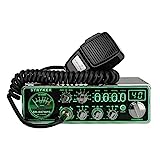 Powerful, robust, and innovative, the Stryker SR-955HPC is the gold standard for many people. While assessing its design and its functionality, we picked up a vibe that this 10-meter radio was created for a wide variety of people, and this was evident from its numerous features.

The radio comes with a 7-color LED backlit faceplate and display. If you installed the radio in your vehicle, then you will be pleased with the fact that you can select a color that will blend in with your car's interior.

While the 7-color LED display is a feature that most people find cool, it can be quite convenient at night. The ability to choose a color that you are comfortable with means that the light coming from the radio will be less distracting.

In addition, since the unit comes with a 32-position dimmer control, you can adjust the overall brightness of the radio to levels that you can work with.

You can also adjust the power of the radio since the radio features variable power control. Though power is important, we were equally delighted that the radio comes with an automatic calibrating SWR meter which we know you will find useful in helping you get the best signal possible.

That aside, the Stryker SR-955HPC comes loaded with 6 roger beeps, but you have the choice of configuring your own roger beeps too.

The Lincoln II is a feature-packed radio that almost makes it too good to be true. Its SSB transmission, for example, is way above that of many other radios, and this could be because it can work beyond the 12W limit.

Overall, the radio can deliver an output of 30W on SSB and this makes its audio clear even when you pair the radio with the stock microphone alone. Don't let the high power output scare you though. You won't be in trouble for using it to transmit provided you have a license.

Additional features like the ANL and Hi-Cut further make this radio worth having as they ensure there's as little noise as possible whenever you transmit or receive. Its ASC, on the other hand helps in suppressing background noise. However, since it comes with manual squelch control, you only need to turn the squelch control all the way down to switch to manual.

Though the Stryker SR 497 HPC is a slightly older model compared to the 955HPC, we still loved it for its simplistic look and its regard for user comfort. In fact, what impressed us most with the radio is that even though a newer model exists, it still packs features that rival many other 10-meter radios that many people would consider as top-tier 10-meter radios.

With the Stryker SR 497HPC, you can adjust the volume to your ideal levels, and this helps in elimination of talkback squeal. This is not the only feature that will help you get clearer audio since the advanced ANL and NB features greatly contribute in making this 10m radio stand out.

Power is also something that Stryker does not shy from. The radio can provide you with up to 100W of PEP power, and this goes a long way in making its transmission and reception capabilities impressive.

Like the President Lincoln II, AnyTone AT-5555N is a 10-meter radio that can easily convert into a 11-meter radio whenever you need it to. As such, you can enjoy the features of a ham radio while using the radio as a CB, and this is something we really liked.

While it may share a few features with President Lincoln II, it does have its own unique ones that set it apart by a small degree. Its large LCD display, for instance, shows all kinds of information clearly.

The AT-5555N also comes with a dual watch function that lets you tune into two channels at the same time. This can prove useful when transitioning from one channel.

In addition, the radio's ANL and NB features go a long way in ensuring that you get the least amount of noise during transmission.

With its 6 memory channels, you could always store channels that you found helpful along the road as well. Since the radio has tuning steps that range from 100Hz to 1MHz, you can fine tune this radio in small steps until you get the best audio quality from a signal.

For most people, the Galaxy DX98VHP is just another 10-meter radio that can perform most of the functions that amateur radios are intended to perform. The reality, however, is that the DX98VHP is one of Galaxy's best 10-meter radios.

The DX98VHP can deliver up to 200W of power making it a powerful 10-meter radio. Coupled with features such as the ANL and NB, this radio is more than capable of delivering clear audio effortlessly.

What's more is that the radio also comes with an abundance of features that make it easy to detect whenever something is wrong. The automatic SWR circuit, for example, is useful in ensuring SWR is low. Switchable talkback, on the other hand, lets you adjust the volume to comfortable levels while eliminating talkback squeal.

With the help of the automatic SWR circuit, the radio can alert you whenever SWR levels are high in via a dedicated LED indicator.

What to Consider Before Buying 10 Meter CB Radios

Buying a 10-meter CB radio is almost equivalent to buying other types of radios since you will ideally be looking out for nearly the same things. With that said, here are some few things you should keep in mind when going to buy 10-meter CB radios.

Always remember to choose high quality 10-meter radios by sticking to known brands. If you are new to 10-meter radios, you could always speak with amateur radio enthusiasts or simply read online reviews about a radio that you liked. Even so, you should still assess the quality of a radio by asking about its talk and listen abilities.

As you may have learnt, there are a few 10-meter radios that equally double as 11-meter radios.

Consequently, should first consider whether you need the radio to operate on the shortwave or longwave band before thinking of features like RF gain control, dimmer control, and whether or not the radio is backlit.

This may not be much of an issue to those who keep their 10-meter radios in one location. However, if you plan to take your radio on hikes, then you might want to consider portability. One thing to remember though is that the more portable a radio is, the less features it may have.

Receiving transmissions on a 10-meter radio is not illegal. Transmitting without a license is. Licenses are usually issued in various levels and this will require you to pick a level. Since the levels are stacked, you need to get the entry license before you can proceed to the next level.